Amazon-Angler hosts groups of adventure-seeking anglers deep into totally un-spoilt rainforest on the Upper Essequibo River, in beautiful Guyana, aka 'The Land of Many Waters' .......

With over 80 miles of pristine river to explore, this wild watershed in the Upper reaches of the Essequibo River has areas that have rarely, if ever, seen a rod or line. This stunning river runs through 100% virgin rainforest, cascading over huge rocks and boulders, creating deep pools and runs.

We catch Giant Cats, Arapaima and lots more on cutbait/livebait, with many more multi-species to be caught on baits, lures and flies. This trip has so many different species of fish to target and we have something for everyone ........

Our season runs from mid September to end March. It is typically warm with temperature over 70º F at night and 80-90º F during the day, but it feels cooler most of the time with a nice breeze from the North. 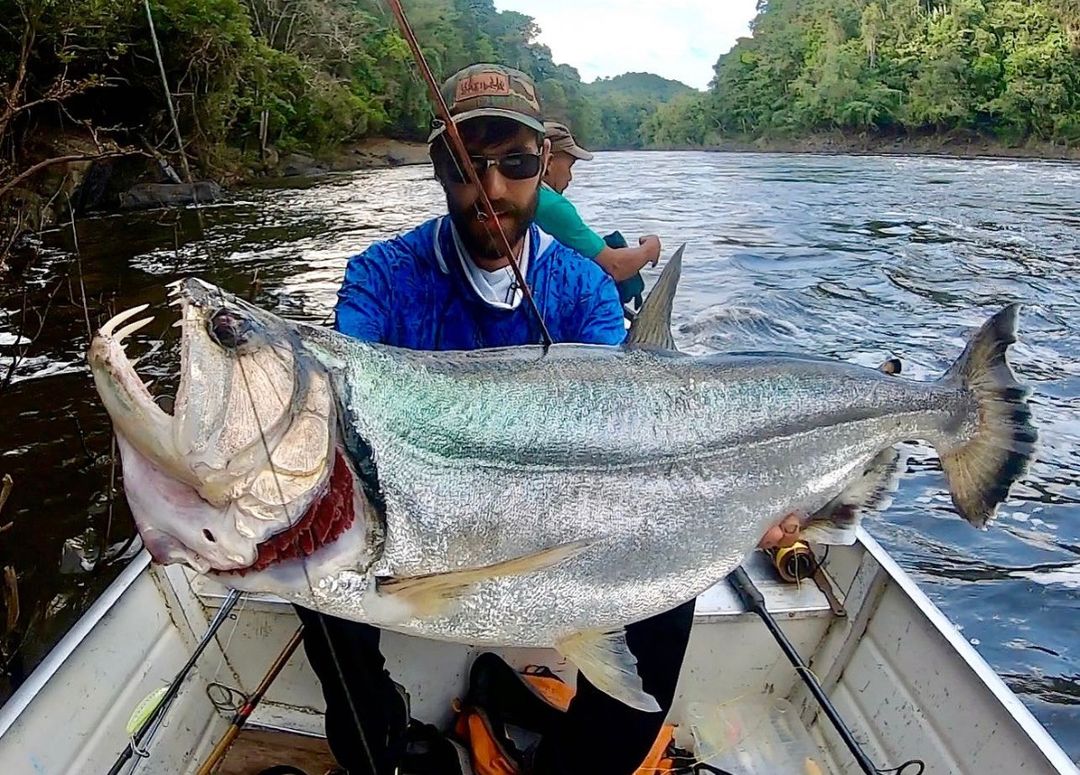 PREDATORS GALORE… There is such a diversity of predatory species to be caught in these rivers. With lures, flies, jigs, spoons, cut baits and other baits, dozens of different fish will keep the avid angler busy the whole trip. *Our count to date is 47 species on rod and line!

Hard-fighting C. cataractae and C. ocellaris Peacock Bass are two of the toughest and meanest Cichla species found in the Amazon Rainforest. These amazing predators can be caught on medium-sized walk-the-dog lures like spooks and skitter walks, small poppers, propbaits and on jigs, flies and minnow baits. They will smash topwater lures with abandon and there is nothing like the strike of a Peacock exploding on a lure worked across the surface. The bigger C. cataractae can reach over 17lbs, with the C.ocellaris getting to 8lbs.

The slash-and-grab Payara/Vampire Fish and the Pike-like Bicuda visibly chase surface lures, minnowbaits, jigs and flies in the faster water. They are often seen crashing on baitfish on the surface. Payara will take cutbait/strips too.

And don’t forget the ever-present Piranhas here. While there are many species of Piranha, the largest is the S. rhombeus/Red Eye or Black Piranha. They can reach over 10lbs with the average fish weighing around 5-7lbs.

There are so many other species for the avid angler who is willing to go that extra mile. Anglers can catch nut, fruit and berry-eating fish like big Red, Black and Silver Pacu, Couti, Aracu and many more smaller scaled species all day long. All these smaller scaled species make for great fresh Catfish bait too! The weird and wonderful are also still to be discovered by many foreign fishermen and we have them all. Plenty of European anglers enjoy what is classified as ‘coarse fishing’, and an angler could easily ‘bag-up’ with sweetcorn, nuts, fruits, potato, fish strips or freshwater snails.

IN SEARCH OF RIVER MONSTERS …… We really do have some RIVER MONSTERS here, with massive Arapaima and huge Cats, from the unusual right up to big bruising bullies. All can be caught on cutbait, livebait or whole dead fish.

Arapaimas are old, ancient beasts that are very prehistoric-looking, with armored-plating over their entire bodies, yet they can be so delicate after being landed. They live in quiet backwater and bays, usually in low oxygenated water and grow to over 400lbs and 4m in length! We only use barbless circle hooks for these giants, to avoid any belly-hooked fish. Great care is needed to revive these Leviathans before returning them to the lagoon. Average weight for lagoon-caught Arapaimas is around 150-200lbs and they can sometimes be seen in the river itself. The males are more colorful than the females, with bright scarlet-red scales along their tails and bellies. *Arapaimas  can be caught on lures and flies also.

The Leopard or Jundia Cat is a dynamite of a fish for its size. Averaging 15lbs, they max out at about 25lbs and are one of the tastiest fish in the Amazon.

Flat-Whiskered Cats are always a joy to catch, with their alien-looking whiskers twitching like antennae. They can reach 30lbs but average around 10-15lbs.

The two species of Surubim or Shovelnosed ‘Tiger Cats’ here are both fast, sleek and strike hard. These hieroglyphic-marked predators can also be caught on lures. Growing to over 50lbs, they are powerful fish to catch.

The express train ‘Banana Fish’/Redtail Cats must be rated as the hardest-fighting Cats in the whole Amazon for their size. An 80lb Redtail will take you all over the river, through timber and rocks and strip line in reel-smoking, screaming runs. They can reach over 100lbs.

Jau Cats are the Sumo Wrestlers of the river and dwell in the rocks near or in fast water and will take you deep into their lairs! Brute force is needed to stop them getting into their holes in the rocks and to land these giants. Big fish can reach well over 100lbs, but they average around 50-80lbs here.

THE KING of all our Cats is the Giant Lau/Piraiba (aka Freshwater Shark), growing to over 400lbs. When hooked, it will roar off at 50 miles an hour and it may take you a couple of hours to land one of these huge fish. Average sized have been between 120-250lbs 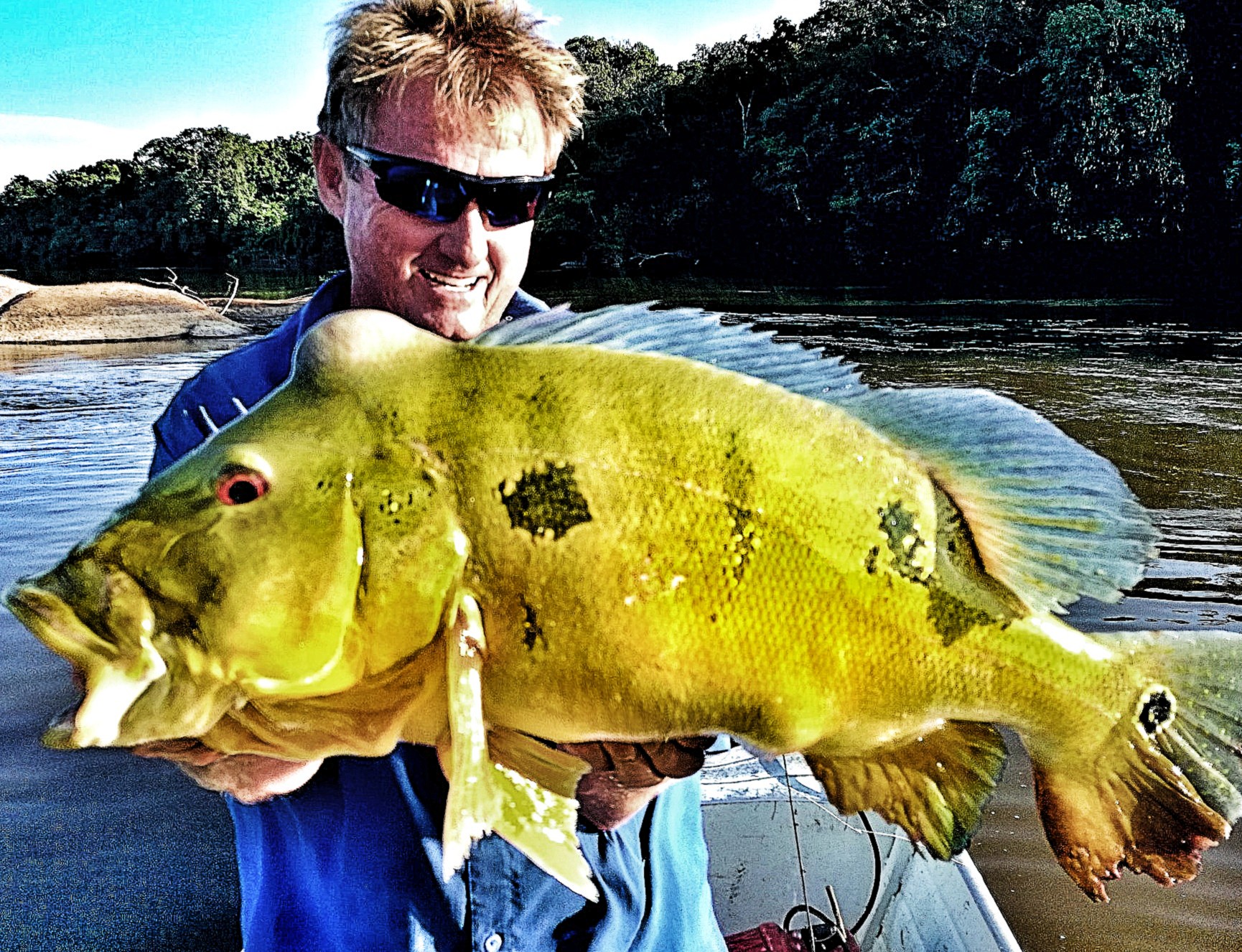 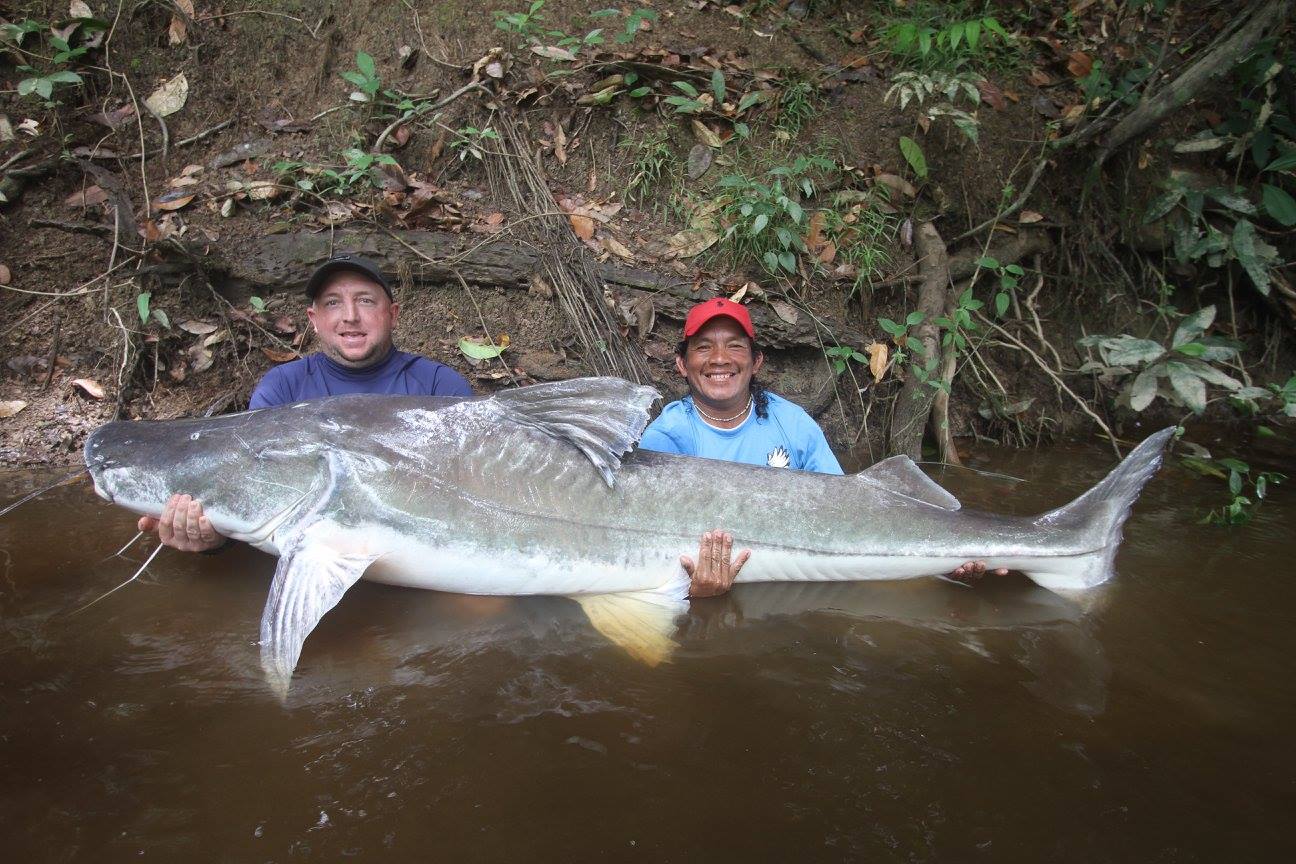 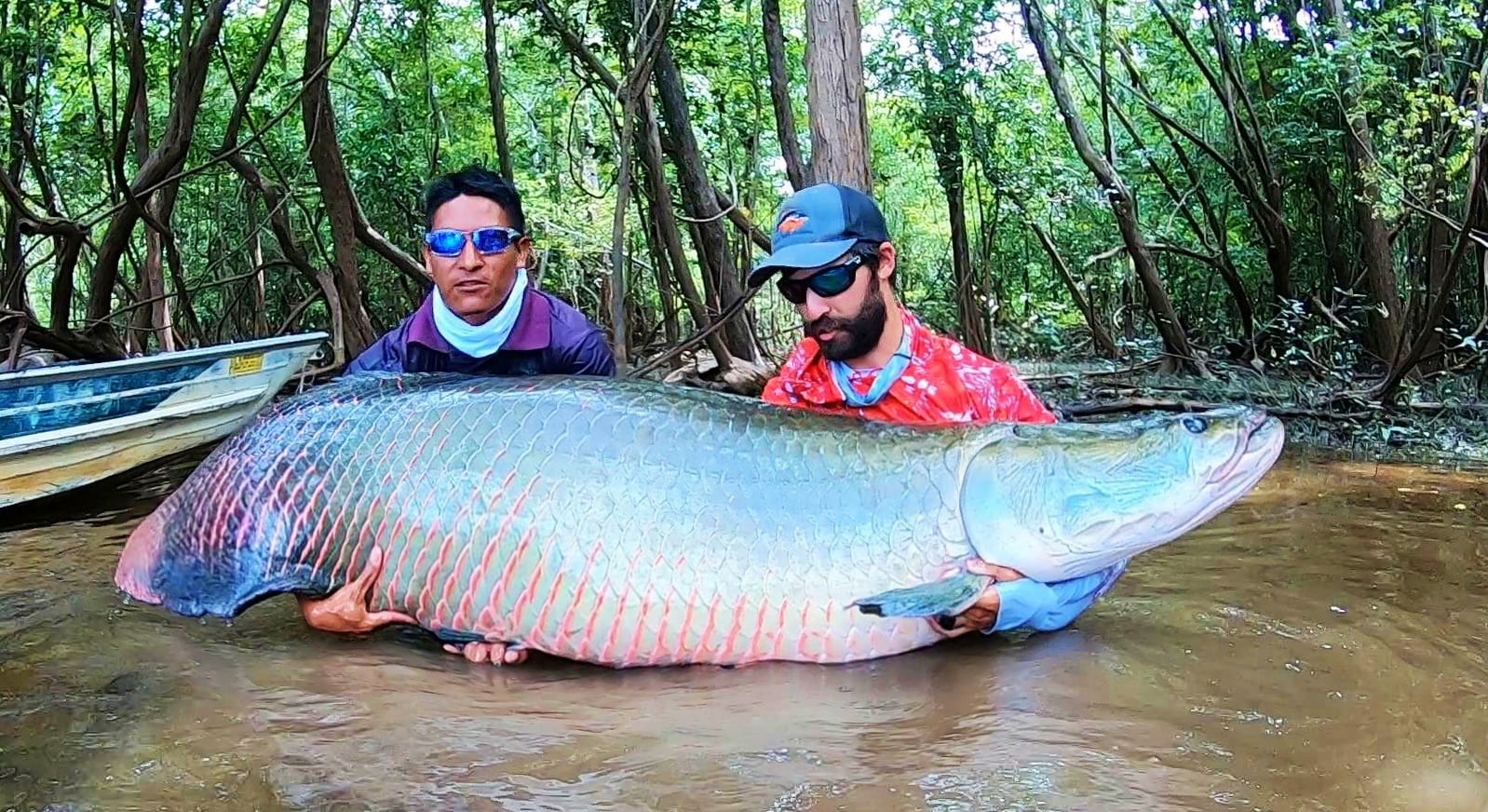 We offer so much to do and see for solo anglers, couples, fishing partners, families and small groups, with a maximum 12 anglers at one time.

Both our lodge and fly-camp are set up under the trees in the shade with a great view of the river to wake up to. A fixed kitchen at the lodge and a ‘Safari-camp kitchen’ at camp will supply our guests with wholesome cooking with three meals a day. The lodge offers 6 rooms for 12 anglers (two anglers per room) and at our camp, each of our anglers will have his/her own tent with a comfortable air mattress. 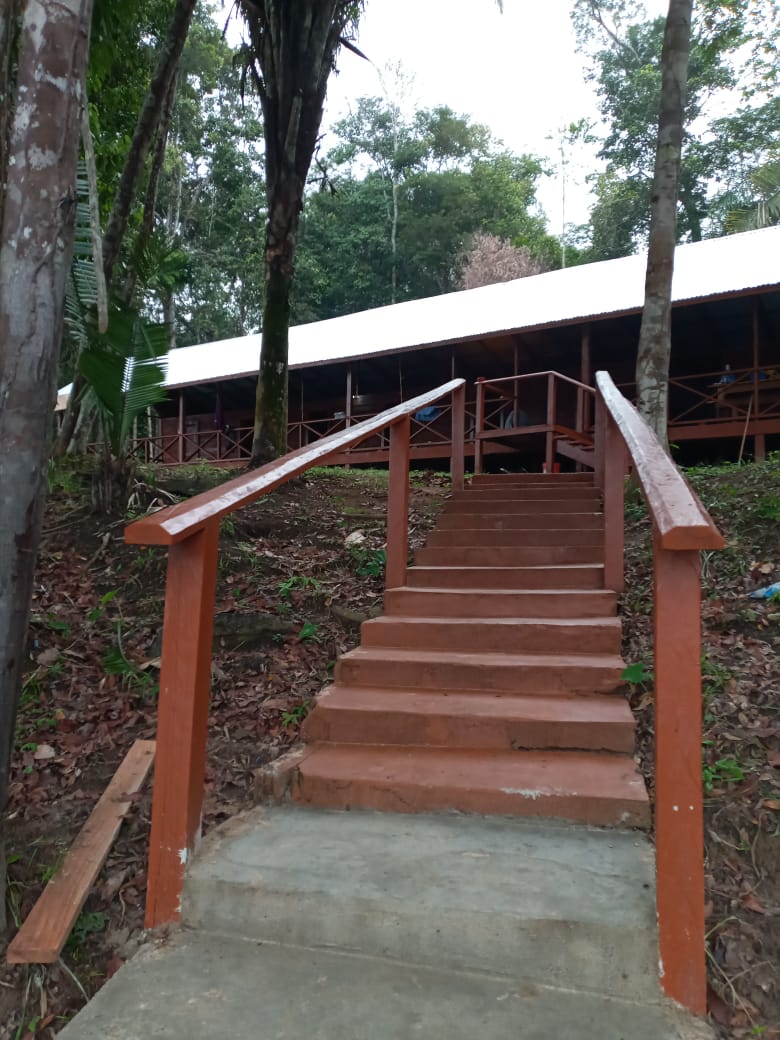 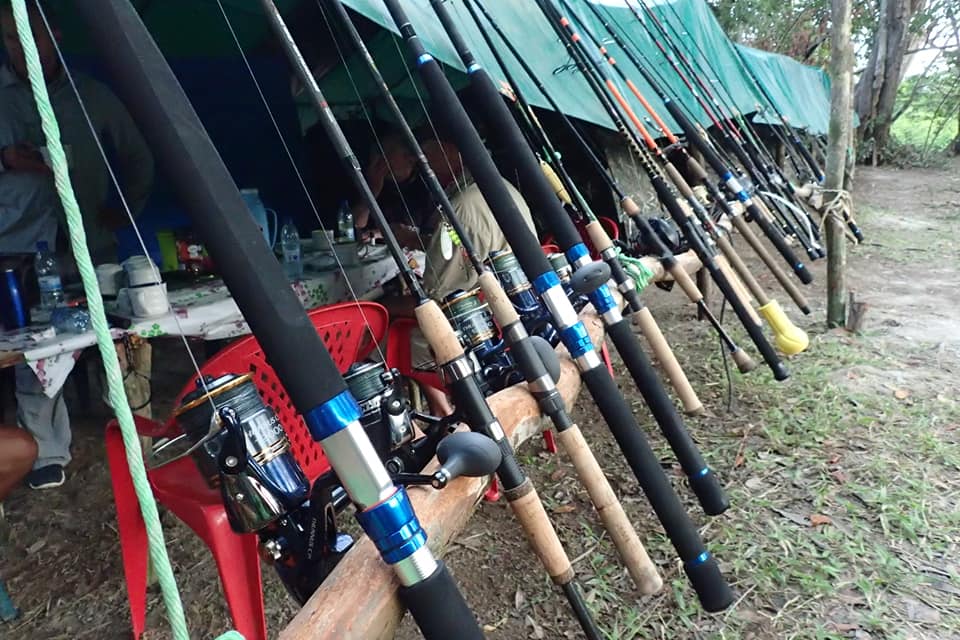 DAYS 3 – 6: Four full days fishing near and around the lodge and King William Falls for Cats and multi-species.

DAYS 7 – 9: Travel down to our Arapaima fly-camp and fish for three full days for Arapaima in the many lakes and lagoons, or fish the main river system for multi-species.

DAY 11: Transfer to CJIA or Ogle and onwards journey home. 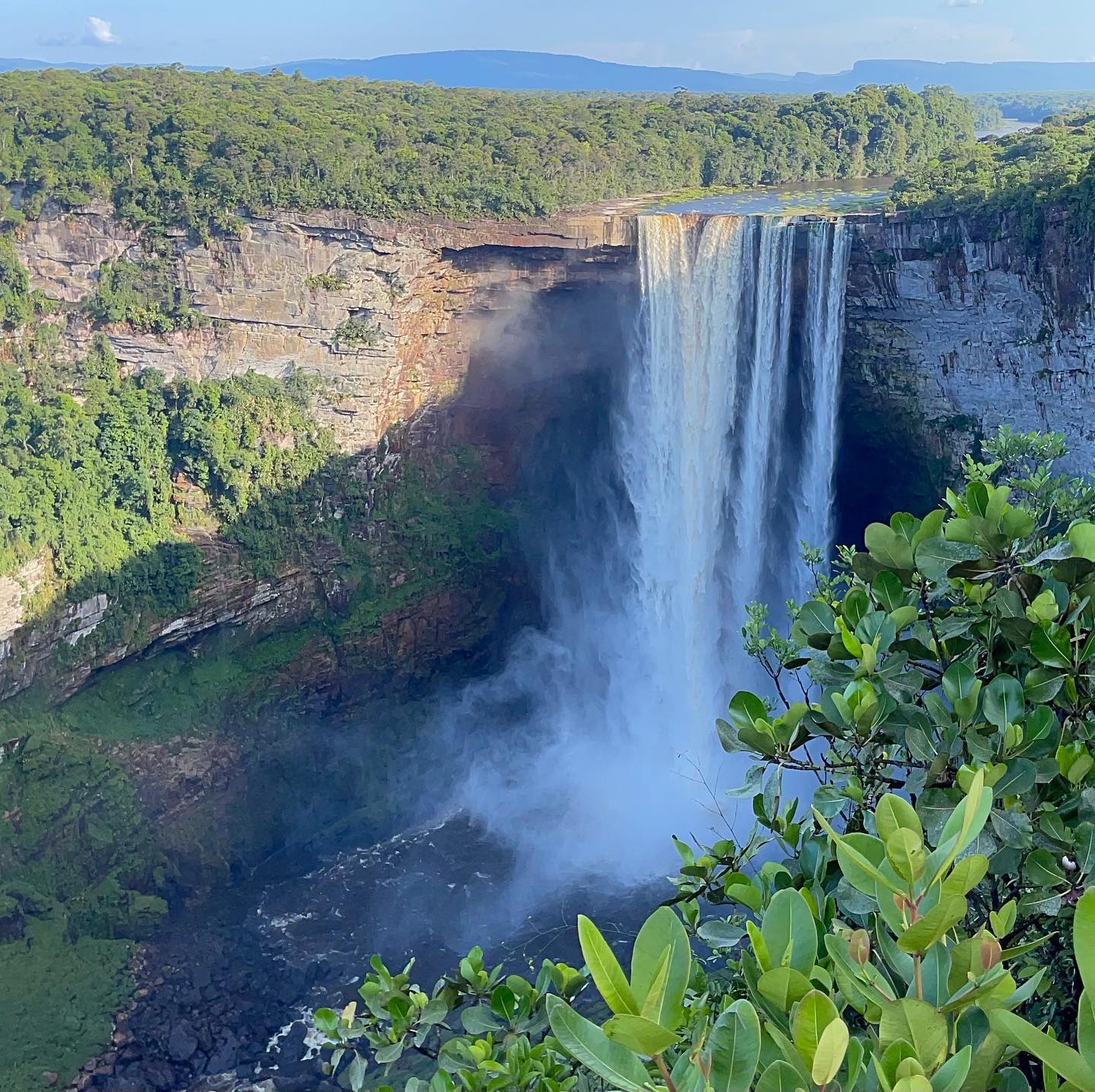