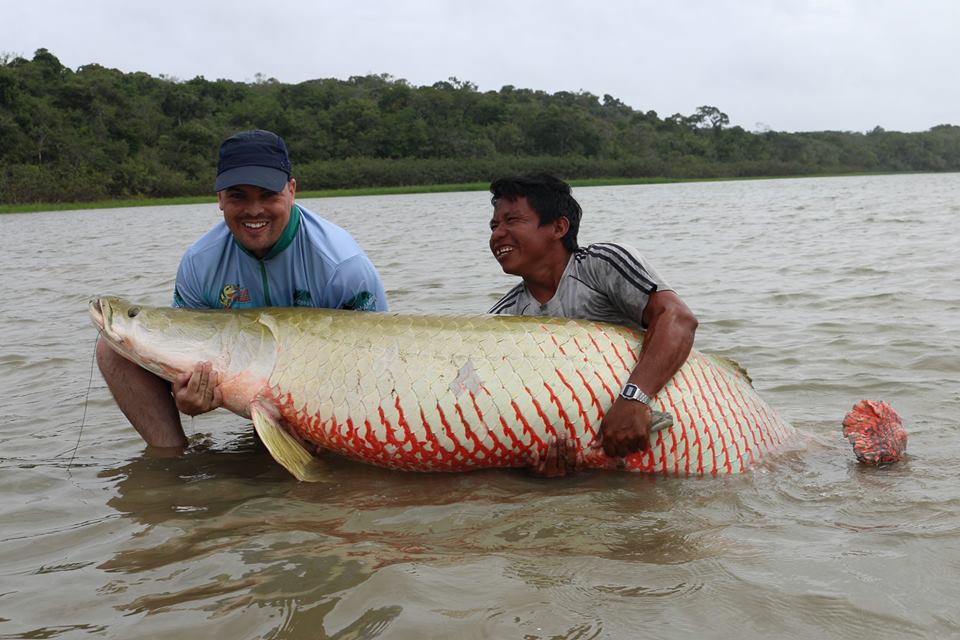 This prehistoric Leviathan is the famed Giant of the Amazon and we catch lots of them in secret lagoons (and sometimes in the rivers too), in both Bolivia and Guyana.

The majestic Arapaima can reach over 500lbs and an average-sized fish is usually around 150-200lbs. An incredibly strong fish, it usually fights in short, fast runs with explosive jumps. Large capacity reels and strong rods are needed if you want a chance at landing these giants.

Their habit is also their downfall as Arapaima are air-breathers. They can live in water with next to no oxygen and as they have to come to the surface to gulp air and fill their air bladders, they give their position away.

The Arapaima has a relatively small head and tiny tail for such massive body mass, with bright scarlet red tail and belly markings (more so in males). It’s easy to see where they get their immense fighting power from and when caught, many an unsuspecting angler has been knocked out with a smack from the hard, bony head of these colossal fish.

Fishing for Arapaima, when and where allowed, is not easy as they can be stubborn and lethargic. When on the move or hunting, they are easy to locate and must be followed quietly. One sound from an oar or rod against the boat and they’ll stay down on the bottom for half an hour or more. But if a carefully-placed bait or lure is put right in front of their noses, they will literally gulp it down and take off like a jet plane.